2020 was supposed to be a year of celebrations, but a world pandemic caused havoc in the events industry. We always hoped that towards the end of 2020 we might just be able to have some sort of celebration for the heroes of motorsport.

One such hero was Colin McRae, son of 5 time British Rally Champion Jimmy McRae. 2020 was the 25th anniversary of Colin winning the 1995 World Rally Championship, an occassion that many wanted to mark.

In August I was approached to take on the idea of curating a collection of Colin’s cars and an event to celebrate his achievement, one that owners of his past competition cars were keen to do.

The following that Colin had, still to this day, is enourmous. He was the first British World Rally Champion and whenever his name is mentioned everyone instantly thinks of the blue and gold Subarus with their distinctive engine note powering through the forests of Wales on course for that championship.

The idea sounded great, but with a pandemic ripping through the country, how could we make this happen. By chance the dates in 2020 worked out extremely well as the 22nd November fell on a Sunday exactly 25 years to the date. This was the catalyst for the idea of MCRAE25.

Initially we thought we may get just a few cars, about 12 to 14, however it soon became appararent that this could be far bigger with even greater support. At the time I was not aware the occassion was to be marked by anyone else.

So a call was put in to Prodrive who ran the Subaru World Rally Team and took Colin to the championship. It turned out that they were just starting to think of doing something too. To cut a long story short we agreed to create something together as each of us had content that would make for a wondeful occassion.

The plans were now well underway and I was actively sourcing cars, making contact with owners who loved the idea and very soon agreed to join in. We managed to source cars that had not been seen in years, tucked away in collections or in the hands of owners who wanted to treasure the memories. It wasnt long before we had reached 25 cars, a perfect number for a 25th anniversary.

Prodrive then recieved approaches from WRC and Wales Rally GB, both with different ideas but ones that could make for an amazing week of celebrations.

After a number of Teams calls, Prodrive set up a Facebook group, MCRAE25 so the public could be involved, as it had now become clear that the event we were planning may have to be held behind closed doors or at worst cancelled. We wanted the public to have some form of involvement, a place to share memories.

WRC set out to make a documentary, Colin McRae – 25 Years A Champion, with the support of Wales Rally GB and MotorsportUK.

The Sunday Telegraph and other publications also agreed to mark the occassion, such was the enthusiasm for this anniversary.

By now I had 28 confirmed cars and 30 provisionals for the MCRAE25 event. This was now set to be the largest gathering of Colin’s competition cars ever amassed in one place. The support from Jimmy McRae and the family was amazing, they all wanted to be there, as did Derek Ringer and Nicky Grist, Colin’s two main co-drivers from Subaru and Ford days.

Then distaster struck, the UK went into lockdown until the 2nd December, which meant that the event could not go ahead. WRC had managed to get their feature done just in time for the Ypres Rally, but the rally was then cancelled. WRC had enough footage to now create a 30 minute programme to use in the space now vacated by Ypres in the TV schedules.

But the main event, the culmination of the week and four months of work was not to happen.

Lots of frantic calls took place, I had after all, over 30 owners of Colin’s cars all expecting to descend on Banbury. The suppoort was amazing they all still wanted to do something before the year was out.

On the actual day, I joined Ian Cook, of PopBangColour fame, and he created one of his Continuous Car Drawings of Colin in L555 BAT on his way to championship success. This was drawn at almost the same time as Colin drove across the finishing ramp at Chester Racecourse in 1995.

Lockdowns in other areas, the new tiered system and restricted travel corridors eventually meant that MCRAE25 was not to happen. The disappointment from everyone was huge, but their safety was our priority.

As four months work had been put into this, I thought by creating a MCRAE25 wesbite, it would be one way of sharing with everyone what was planned and the cars and stars that were due to attend.

A huge thank you goes out to all the car owners, Prodrive, the McRae family, Paul Grimshaw Vehicle Movements, WRC, Wales Rally GB and MotorsportUK for supporting MCRAE25. 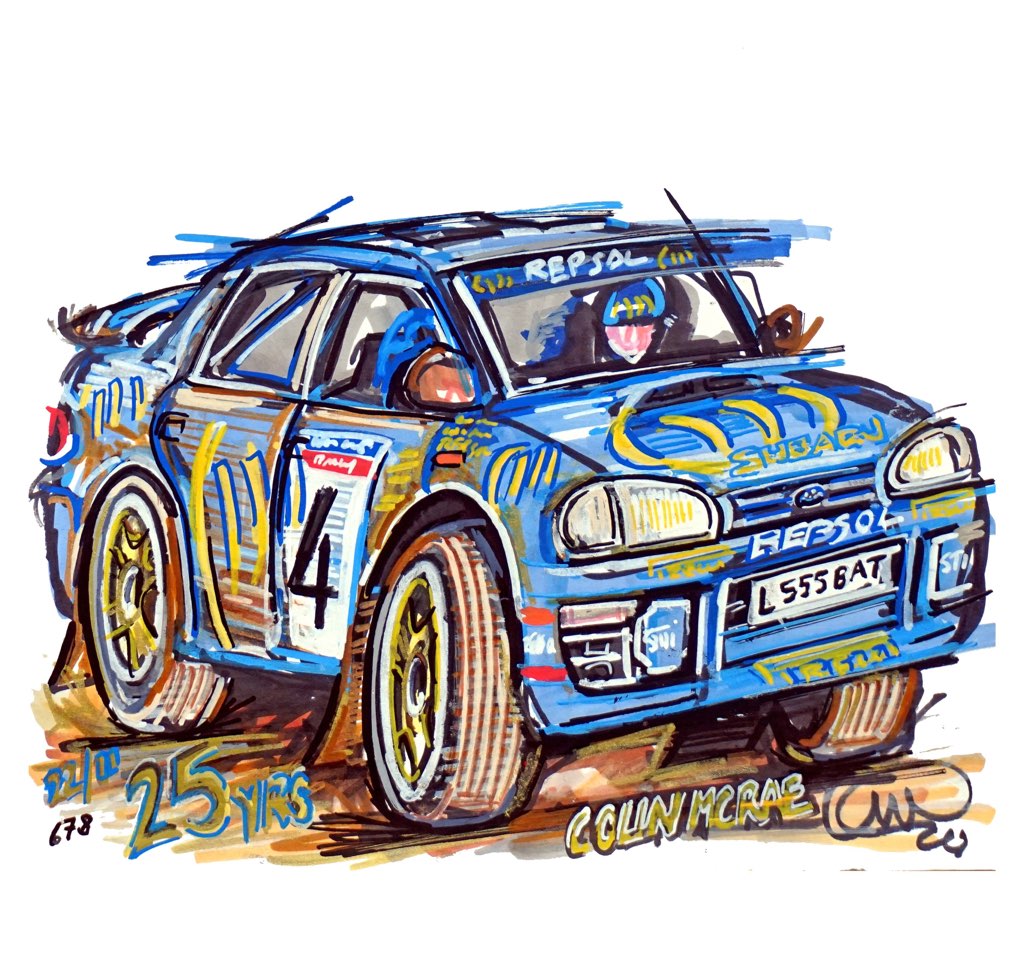 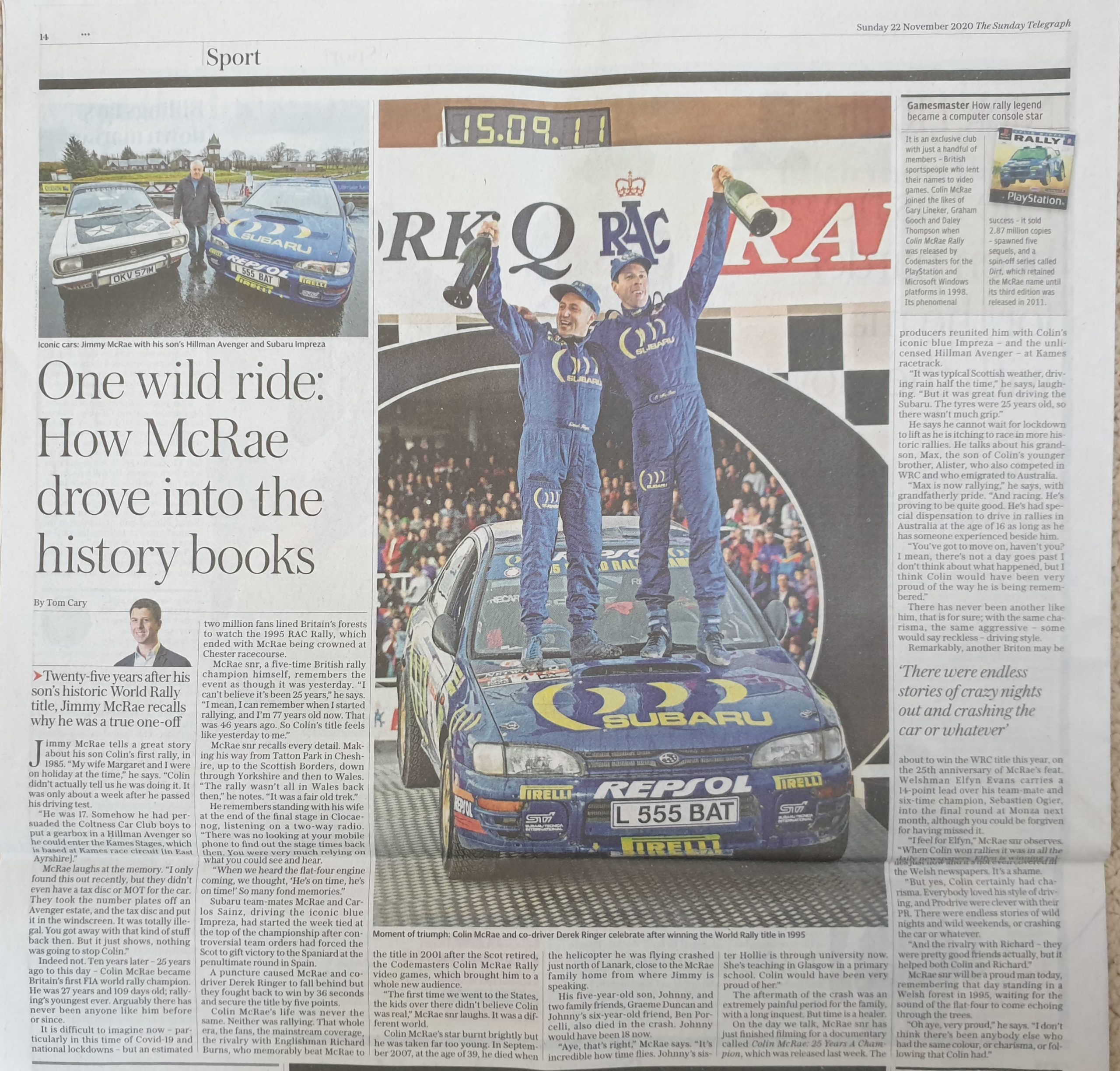 An original artwork created on 22nd November 2020 at 3.15pm by PopBangColour 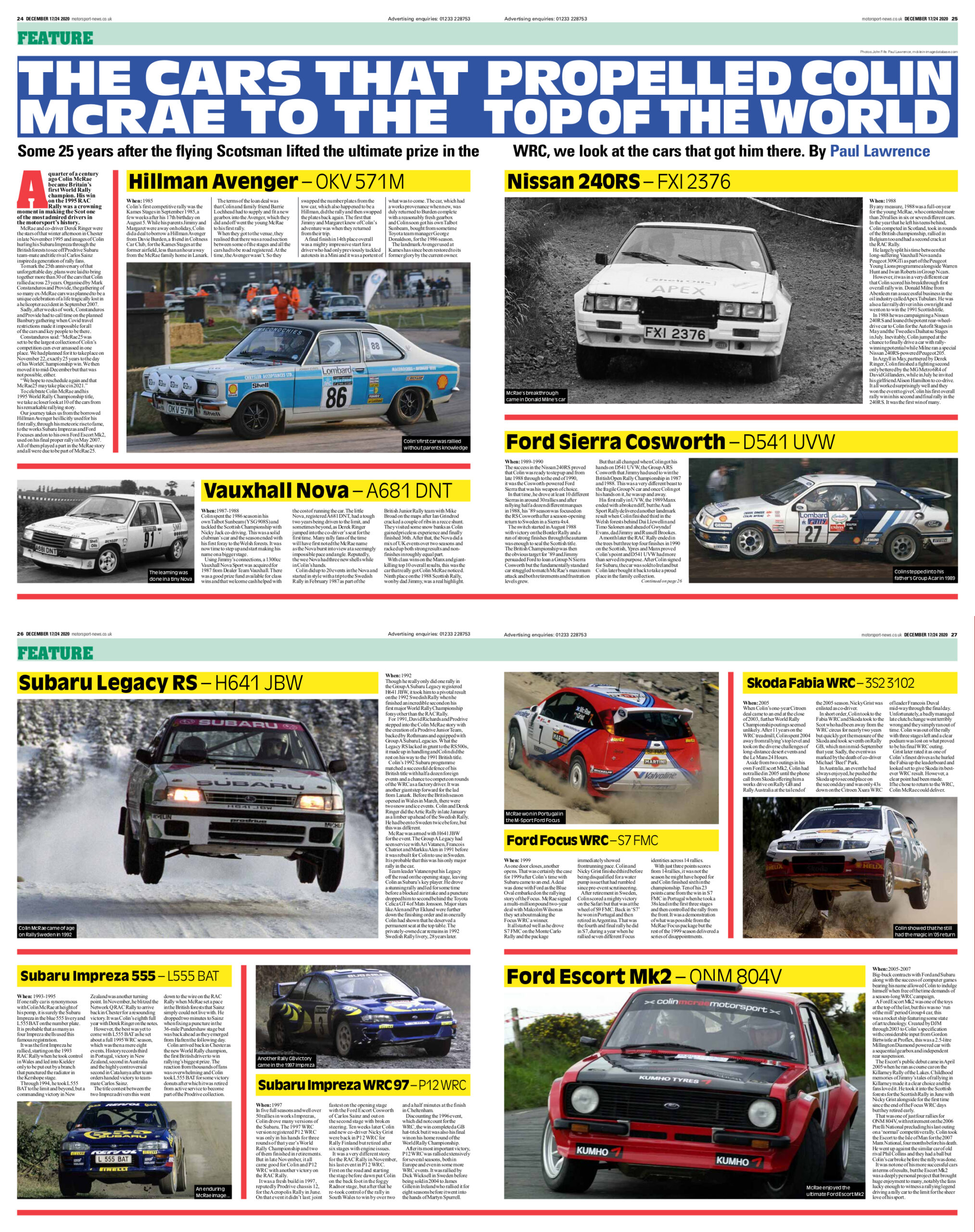 Motorsport News carried a 4 page special feature on MCRAE25 in their Christmas issue highlighting the key cars that took Colin to the top. By Paul Lawrence

MCRAE25 was a collaboration between Mark Constanduros of MotorvationPR, Prodrive, WRC, Wales Rally GB and MotorsportUK, to create a week of celebrations culminating in a curated display of Colin’s competiton cars.